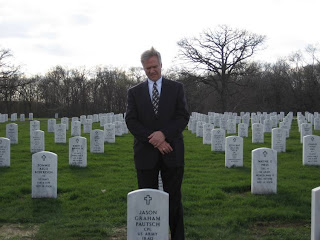 "I know another Father who lost His Son on Good Friday. It is because of that we know Jason is ok." - Uncle David Pautsch

These past few weeks have been somber. After attending a somber Good Friday service, I returned home where my dad called me with news that my 20-year-old cousin, Jason had died that morning in Iraq. A suicide bomber had driven into an Iraqi police post and Jason's convoy happened to be there at the same moment (I'm not sure if those are the exact details). The family notified, his name released, the press releases started rolling in. My family's faith became strickingly evident and no one could deny the source of my uncle's hope and the rock Jason had stood upon. 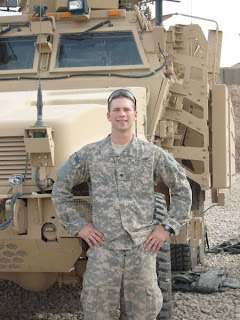 "All the other pretend gods want you to die for them, but instead Jesus died for you!" -Cpl. Jason G. Pautsch

"When he was in Desert Training last year in the Mojave Desert, he was having a discussion with some of his buddies and one got rather antagonistic saying, “What makes you think Christianity is so much better than any of the other religions in the world?!” Jason told me he didn’t know what to say but he breathed a little prayer to the LORD and said, “I need some big help on this one.”
As it turned out he opened his mouth and said, “It’s like this. All the other pretend gods want you to die for them, but instead Jesus died for you!” That pretty much stopped the mouths of his detractors." -David Pautsch

To think that 2,000 people attended Jason's viewing. To think that 700 attended his funeral, including the governors of Iowa and Illinois. To think people lined streets with flags and ribbons. To think that, as his herse made its way down the HIGHWAY, yes, the HIGHWAY, people stopped to salute their hometown hero. To think that he's gone... It boggels my mind and seems surreal that people would honor my cousin in this way. It brightens my heart to know the media is broadcasting his story of faith and our family's dependence on God. May many come to know Him through this.

To learn more, please do a web search on "Jason Pautsch"

Bethany
I made this blog as a journal to keep track of what I did teaching preschool and how it went. Thanks for visiting!