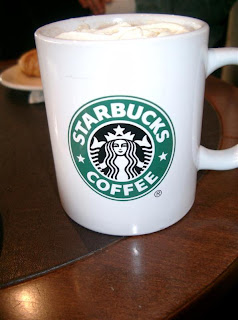 http://www.starbucks.com/aboutus/pressdesc.asp?id=895
It looks like Starbucks is continuing its re-imaging. I've always appreciated Starbucks (read The Starbucks Experience...its a great book). Being a coffee fan, I've been to my fair share of Caribous and Starbucks (even overseas). Starbucks' food is far better than Caribou's. Caribou recently rolled out a pretty tasty cinnamon-sugar doughnut, but its not my favorite and with its low health value, I'm unimpressed. About a year and a half ago Caribou re-did their food. This made their muffins smaller and not as tasty. My friend's 8-year-old daughter and I recently splurged on a choclate chunk cookie at Caribou and ended up throwing most of it away due to its taste! Starbucks' apple fritters, cinnamon rolls, and croissants (at least in Ireland), though unhealthy, are really yummy! So, Starbucks wins. I'm very delighted with their new menu. I love having healthy options to go with coffee (which, being a mocha, is unhealthy and needs something to balance it). I would much rather have a berry stella or bowl of oatmeal to go with my coffee as I would make when I have coffee at home. Now, don't get me wrong, I rarely eat breakfast at Starbucks, but this will be a nice option for when I go there with friends and would like something more than a cup of coffee or a light meal (coffee and a bite fills me enough).
Posted by Bethany at 6:22 PM

Bethany
I made this blog as a journal to keep track of what I did teaching preschool and how it went. Thanks for visiting!